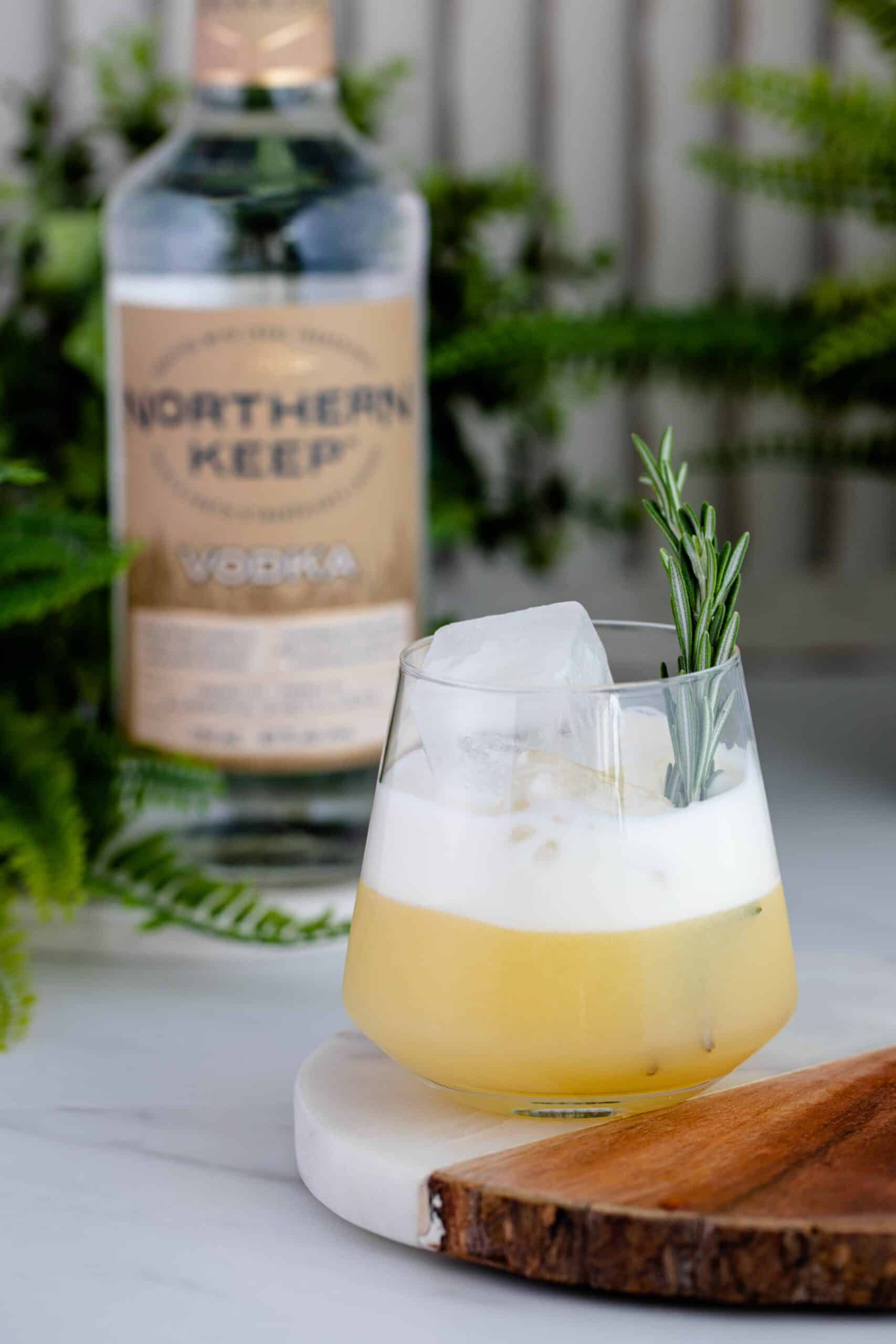 I’m bringing together the warming spices of Drambuie and mixing it with Vodka, Orange Juice and Rosemary for this refreshing winter twist on the classic sour. If you’ve been wanting to experiment more with vodka, you’ll love this warming, shaken rendition.

Choosing your Vodka for your Rosemary Vodka Sour

It’s very likely that your drinking journey started off with Vodka. I know mine sure did, but as I evolved, I know that there’s still a ton that have stayed true to the Vodka Soda. Well I’m here to share some new cocktails using this iconic spirit, and this sour does just that. It has amazing warming spices thanks to Drambuie, plus it has bite and savoury notes from the Rosemary that I absolutely love.

So this is a liqueur that I find I’m constantly mixing with during the Fall and Winter months and that’s based on its taste profile. It’s a Whisky based liqueur that is infused with a number of spices and honey, making it perfect for the warming seasons. I’ve used it on a number of occasions here on Liquid Culture, so this will not be a liqueur that goes to waste!

I love the added depth of its whisky base, which is what I was going for here. In addition, with most sours consistently made with whisky, I thought it brought the best of both worlds here.

If you don’t have access to Drambuie, although it’s hard to replace, I would add a dash of an Irish Whisky and honey. Possibly shake in 2 cloves, or when creating your syrup, add your favourite fall spices to infuse.

I’m always team Egg Whites, because it adds a texture and depth to a cocktail you can’t find elsewhere. Think of it as the foam top to your latte, which I’m sure we’re all a big fan of.

Thing is, maybe you’re vegan, or just grossed out by the idea of egg whites in your cocktail. Well, you do have some options! Aquafaba is my first choice, and for those of you new to the concept, it’s simple chickpea soaked in water (or you can use the liquid that’s typically drained from your cans). It BARELY affects the taste, I promise you that, plus this is a very sustainable practice.

There’s also foamers out there that create that same effect (they’re typically sold in the bitters section in your specialty bar stores). I’ll admit, I’m not the biggest fan of them or the taste, hence why I never use them in my cocktails.

Want to find more Vodka cocktail inspiration? Check out the link here for more creative ways to shake up with vodka!

Featuring Northern Keep Vodka with the warming spices of Drambuie, we've got a delicious Vodka Rosemary sour for you to whip up.

Note that the Simple Syrup recipe (as with most of the recipes on the website) uses a 1 to 1 ratio of Water and Sugar. Simply combine granulated sugar with equal parts boiled water. Stir until dissolved and combined.

Hi, I’m Monica and I’m your Fairy Barmother. At Liquid Culture, creativity is encouraged and education is used to empower followers to be the best they can be.
PrevPreviousTequila, Mole and Blood Orange Cocktail
NextBitter Sweet Beginnings – Pisco Pear & Bitter Fall SourNext